Finally home and after a few days recovery I decided to jump in my very messy garage. Even with the best intentions my garage seams to collect stuff, especially during the winter! So to make space and due to lack of time, I’m stacking everything on the back wall and hoping I don’t need anything at the bottom of the stack until I have time to sort it out ( fingers crossed here but I know that there is at least one point I will need to pull everything out).

Since returning from a long ish stint away and wanting to see a big physical change right away I decided to drop the body back down on to the chassis, even though I have 101 jobs still to do but I need to make some progress and most of the little jobs can be done during the quiet hours. Unlike putting a very delicate body back where it belongs.

Since the body is fully way past it and any sane person would of binned it by now, I’m expecting it’s time on trestles to have done some twisting damage to the shape of the body. Most people (that’s not me by the way) would of braced the body before putting it in the air ( and moving house with it) but the initial problem is still there. There is so much damage and lack of strength in the tub that bracing it would have fixed any misalignment and would become a permanent feature and I want to avoid this. Knowing that the tub is bent and twisted makes me check and double check the alignment as I go and let’s me bend and shape the body back into something resembling a Beetle before fixing it in place with new metal and weld.

Getting the body down is the easy bit and removing the trestles is straight forward and quick to complete. The trestles I’m saving for the future or until my wife sees them in the garden but they are as close to the kitchen window as possible and the only way to see them is to go outside so I should be ok unless this winter is very mild and my wife decides to go out into the garden for some reason……..

i protected the body tub with a little bit of duct tape along the rails but I didn’t have enough to go all the way around so I will be touching up some of the paint when I finish the body. I do have a new body seal but I’ll leave this off until I finish welding the heater channels and any repair patches needed. 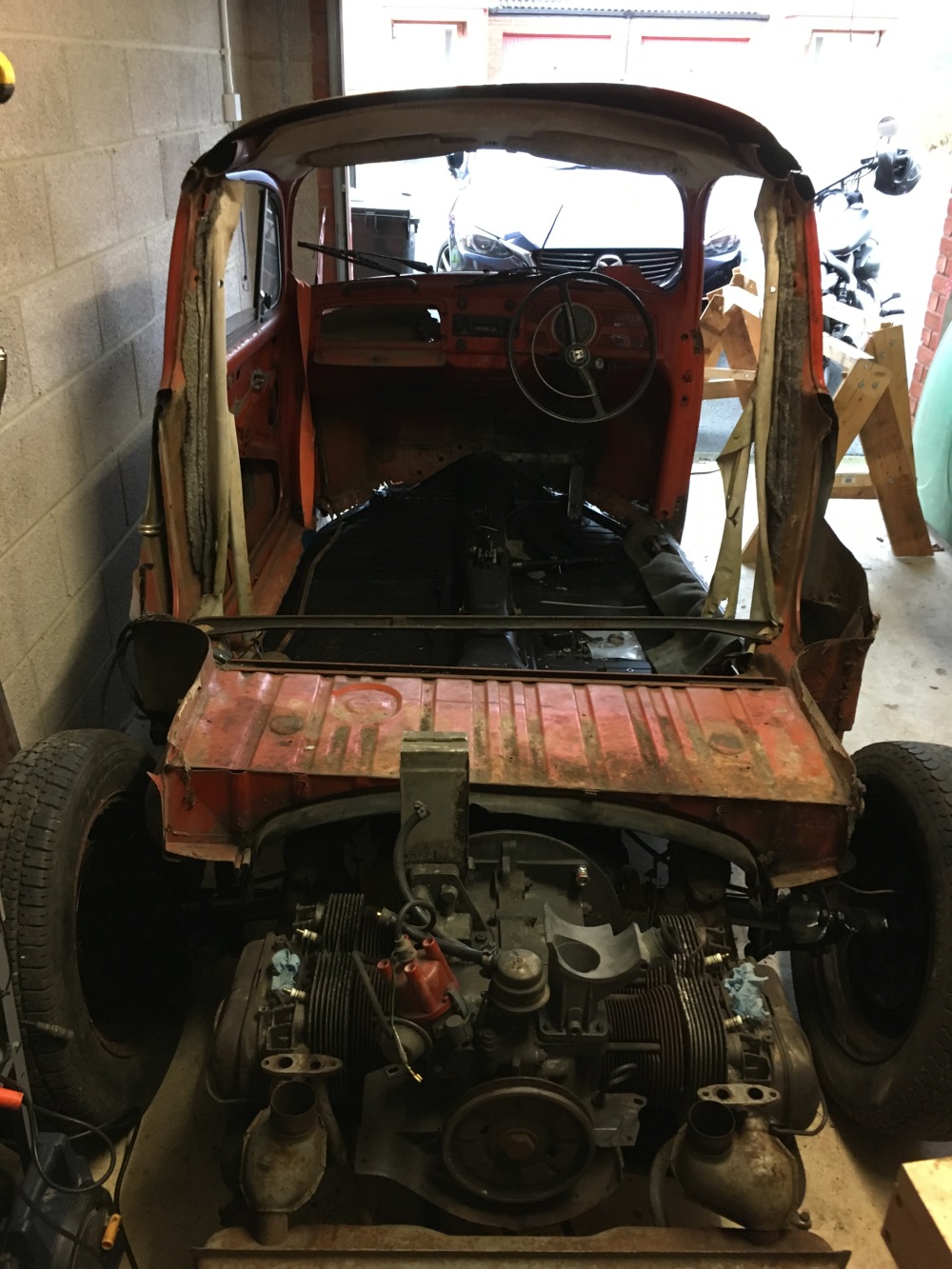 Body down own time for a quick look around to see how it sits. 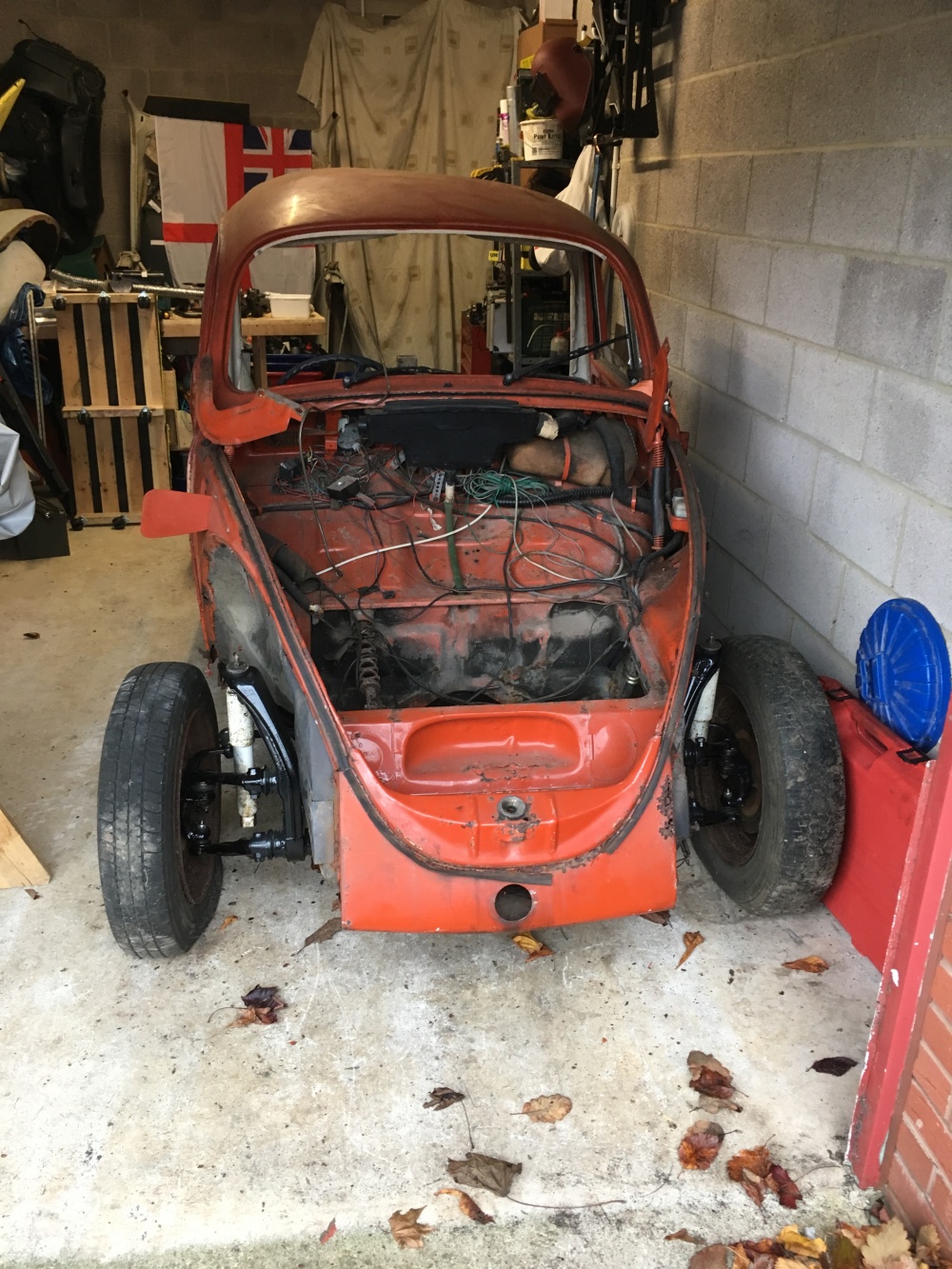 A couple of pushes here and there the body does sit pretty well but I can see a slight bulge on the drivers side roof section and I can see the door gap has moved so first job fit the drivers door.

The door is still complete and needs to be lighter before I fit it so out comes the glass, quarter light and trim. I’ve also removed the check strap and greased the hinges. Fitting the door was straight forward and I already had new screws so on it went but when it came to closing, the door impacted the B pillar. The door gap has moved and there was no way I could shut the door on the latch I left on. It’s the same door that cam off this car so it was going back on! By pushing and shoving and making sure the hinges were in the correct position so the door sat off the inner seal lip and not on top of it I managed out get the door fully latched. Then by a few more pushes and levering the body around the door I think I have a pretty good door gap.

The trim line is pretty spot on as well

I’m still deciding weather it’s worth welding the door shut for now to ensure this gap is maintained but I might need access during the build and I need to check clearances for opening and shutting so I think I’ll leave it for now but I am putting a couple of alignment marks on it using a marker pen.

The roof bulge is a bit of a problem and I’m going to have a think about it before I tackle it but it is something to do with the damage on the top of the B pillar and and with slight outwards slightly so I might fix a brace on this later before I weld in the new section of roof.

Finishing up I spent a little time tidying up the front of the car and removed the air box, stereo and bonnet hinges. One of the hinge mounts has a sheared bold (wasn’t me this time) so I need to drill this out at some point! I also pulled out the old cardboard glove box and bonnet seal, most of this stuff went in the bin.  The window wiper arms came off as well.

physical progress this time and visually I looks roughly like a car again. Having a good poke around again is always good but I’m going to need the inner wing lower repair panels because I have nothing left of the original to base a pattern off unless I can template it somehow with some paper and card…….  I’m still watching my budget and £25 either side is a cost I don’t want to pay if I can make them from sheet steel.

The wiring loom has had it as well and I’m not labelling when I disconnect it because I don’t think it’s original or connected correct.

Pulling out the heater channel and A pillar repair from my storage rack is a good feeling and I’m ready to tackle this big task, watch this space…..